Over the past week, the news has not been good on the management of COVID-19 risk as U.S. states reopen.

Surges have been reported in a number of states, leading to calls by New York, Connecticut, and New Jersey for quarantines of visitors from hot spots. According to the U.S. Centers for Disease Control and Prevention, there have been over 2.3 million cases reported and more than 121,000 deaths in the U.S. as of June 24.

The World Health Organization (WHO) reported more than 9.1 million cases globally and 470,000 deaths as of that time point. During a June 24 briefing about the coronavirus, WHO Director General Dr. Tedros Adhanom Ghebreyesus said the organization expects to hit the 10 million case milestone within the next week. In the last month, more than 4 million cases have been reported.

"This is a sober reminder that even as we continue research into vaccines and therapeutics, we have an urgent responsibility to do everything we can with the tools we have now to suppress transmission and save lives," Ghebreyesus said.

On the practical level of day-to-day work life, a lack of resolution of the public health emergency means a continued shift from in-person to virtual meetings. The College of American Pathologists is among the latest organizations to move its meeting to a virtual format, and the United States and Canadian Academy of Pathology has already committed to moving its meeting in March 2021 online.

The American Association for Cancer Research (AACR) had opted to split its annual event into two virtual meetings, the second of which was held June 22 to 24. A study about the value of genetic blood testing in young adults with early-onset cancer was featured in the press program. Researchers reported that blood testing identified patients with germline mutations, some of which may be targeted with available therapeutics, such as poly (ADP-ribose) polymerase (PARP) inhibitors.

Another study that was highlighted at the AACR meeting and also in the journal Nature Medicine involved the evaluation of a liquid biopsy method based on DNA methylation and powered by artificial intelligence (AI). The method had high sensitivity for classifying gliomas and distinguishing high-grade from low-grade disease, according to the researchers.

AI for pathology applications got a big endorsement this week from the National Cancer Institute (NCI). NCI scientists reported that an AI system applied to dual-stain cervical cancer testing performed well and has potential to reduce the number of unnecessary follow-up colposcopies. Experience with the automated system shows how machine learning could transform cervical cancer screening, the scientists said. 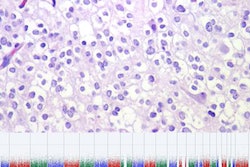 Mortality rates decreased "significantly" for 12 of the 15 top cancer sites analyzed, according to a team led by Tyler Kratzer from the American Cancer Society. The researchers also found greater mortality declines for certain cancers in particular years, such as lung cancer being 44% lower in 2019 compared with its peak rate in 1993.
November 11, 2021

The method -- called cell-free methylated DNA immunoprecipitation and high-throughput sequencing (cfMeDIP-seq) -- has been developed for blood and other kinds of liquid specimens. Testing screens for abnormal methylation, whereas liquid biopsy tests typically look for mutations, the researchers explained.
June 23, 2020

The services are based on epigenetic research on central nervous system tumors published by NYU Langone's pathologists with the German Cancer Research Center in Heidelberg (Capper et al, Nature, March 22, 2018, Vol. 555:7697, pp. 469-474). The researchers used DNA methylation to improve the accuracy of diagnosis for brain tumors, and the classifier is available online at no cost.
October 27, 2019

CAP has drafted 13 recommendations related to testing for diffuse gliomas, with the guideline open for public comment through September 30. The draft recommendations include strong endorsements for IDH mutational testing in all diffuse gliomas and for MGMT promoter methylation testing in all cases of glioblastoma. CAP also included guidance on the management of patients with a 1p/19q codeletion.
September 9, 2019
Page 1 of 1