Where bacteriological trial may be inconclusive, artificial intelligence (AI) can assist in diagnosing tuberculosis (TB). New research shows that TB can be consistently detected on lateral chest x-rays by an ensemble of two different types of deep-learning networks. The findings were published online recently in Frontiers in Genetics.

As part of the End TB strategy, the World Health Organization (WHO) has recommended the use of chest x-ray as a screening and triage tool where bacteriological diagnostic tests are unclear. Inconclusive TB tests are common in children due to their lower bacteria counts, according to the WHO. The strategy also states that lateral chest x-ray views may be needed in cases of a challenging bacteriological confirmation in younger children.

AI for the detection of TB

Although a number of AI studies have shown the potential for using AI to detect TB, these algorithms typically utilize only the frontal chest x-ray projections: the posteroanterior (PA) and the anteroposterior (AP) views. However, a research team led by Sivaramakrishnan Rajaraman, PhD, of the U.S. National Institutes of Health, trained ensembles of AI algorithms -- convolutional neural networks (CNNs) and vision transformers (ViTs) -- that were able to take advantage of the diagnostic information contained in the lateral views ( Front Genet, February 24, 2022, Vol.13).

"The main contribution of this work is a systematic approach that benefits from constructing ensembles of the best models from both worlds (i.e., CNNs and ViTs) to detect TB-consistent findings using lateral [chest x-rays] through reduced prediction variance and improved performance," the authors wrote.

Lateral chest radiographs help to detect clinically suspected pulmonary TB, particularly in children. A number of studies have shown the benefit of lateral chest x-rays in, for example, identifying mediastinal or hilar lymphadenopathy. They also help to provide information on the thoracic cage, pleura, lungs, pericardium, heart, mediastinum, and upper abdomen, according to the researchers.

“These studies underscore the importance of using lateral [chest x-ray] projections as they carry useful information on disease manifestation and progression; hence, this study aims to explore these least studied types of [chest x-ray] projection (the lateral) and propose a novel approach for detecting TB-consistent findings,” the authors wrote.

As ViTs have also shown promising results in image-recognition tasks, the researchers sought to explore the potential benefit of combining both CNNs and ViTs into ensemble models. They trained and tested the individual and ensemble models using the CheXpert dataset and PadChest datasets. Of these, 90% were used for training and 10% for testing.

In the training process, researchers meant to transfer modality-specific knowledge to the algorithms and then fine-tune the models for detecting findings consistent with TB. In testing, the ensembles yielded performances such as a Matthew’s correlation coefficient of 0.8136 and an area under the curve as high as 0.949, significantly better than the best individual models.

The study authors found that the accuracy of the models was not related to the localization of the disease region of interest.

"This underscores the need for visualization of localized disease prediction regions to verify model credibility," they wrote.

The researchers also found that the two best-performing ensembles produced a mean average precision of 0.182, significantly better than the individual models and other ensembles. 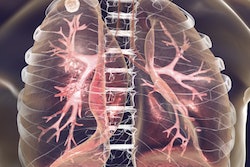